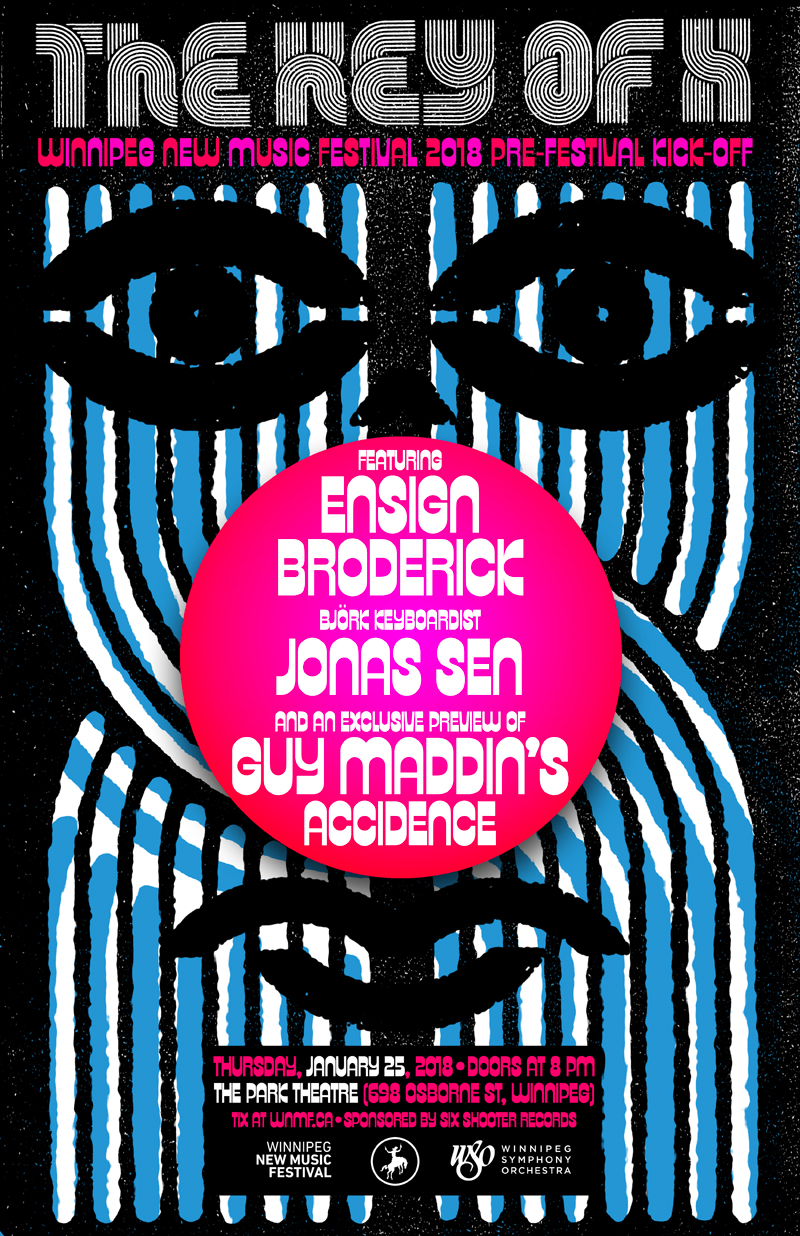 Featuring Icelandic pianist, composer and frequent Bjork collaborator Jónas Senand the enigmatic Canadian experimental songwriter Ensign Broderick, who performed at Interstellar Rodeo, The Key of X brings elements of avant composition, improvisation and experimental filmmaking together for a night of nuance, complexity and beauty. Of special note is the exclusive preview of a new short film ACCIDENCE by Guy Maddin, Evan Johnson and Galen Johnson.

THE KEY OF X program includes:

Tickets for The Key of X are now available from the Winnipeg Symphony Orchestra. Buy here.

Enter Ensign Broderick’s dizzyingly expansive musical cosmos, where you can ping-pong across decades at lightning speed from Toronto’s Le Coq D’Or to the Metropolitan Opera, from The Blitz to the Louvre. A disciple of the ‘triumph of artifice’ of new wave, he is also a furtive, meticulous cataloguer of self and scene. Ensign Broderick has emerged out of nowhere with a fully formed artistic vision: a dramatic, piano-driven sound that is lavishly out of time.

With Feast of Panthers, the first album set for release by Six Shooter Records, Ensign Broderick opens his vault, a tangled fuse box that holds forty years of songwriting circuitry. With songs that hail from 1975-2011, this album reveals a creative process like no other, one that mines the glam and bathos of new romanticism, Toronto’s little known 60s R&B heyday, classically-informed structures and conventions and deeply personal stories of codified tyranny, in no particular order. Feast of Panthers is less a debut album than it is a door, one of many, into the labyrinth.

Six Shooter Records is excited to introduce Ensign Broderick with Feast of Panthers, coming March 9, 2018. Get a sneak peek of our first single, True Shame, coming in January.

Ensign Broderick hit the stage with his full band Thursday night for his first ever Toronto show. Opening for the Rheostatics, EB smashed out a 45-minute set as part of the celebrations of the Horseshoe Tavern’s 70th Anniversary.